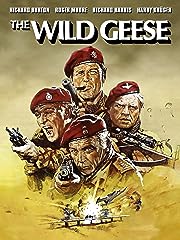 Screen legends Richard Burton, Roger Moore and Richard Harris star as a team of aging mercenaries hired by a wealthy industrialist for one final mission: Recruit and train a squad of desperate commandos, parachute into an unstable African nation, snatch its deposed President from a maximum security army prison, escape via the military-controlled airport, and massacre anyone who gets in their way.