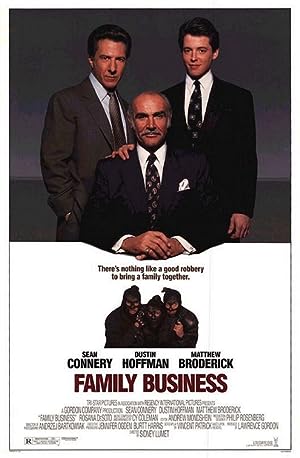 Academy Award® winners Sean Connery (1987 Best Supporting Actor, The Untouchables; Finding Forester) and Dustin Hoffman (1988 Best Actor, Rain Man; 1979 Best Actor, Kramer vs. Kramer) team with Matthew Broderick (Election, Ferris Bueller's Day Off) to play three generations of the same family, intent on FAMILY BUSINESS-burglary. Somehow, some way, they're determined to make crime pay. But the real payoff is seeing these three great stars in a laughs-and-larceny movie treat! Jessie is an aging career criminal who has been in more jails, fights, schemes and lineups than just about anyone else. His son, Vito, while currently on the straight and narrow, has had a fairly shady past and is indeed no stranger to illegal activity. They both have great hopes for Adam, Vito's son and Jessie's grandson, who is bright, good-looking and without a criminal past. So when Adam approaches Jessie with a scheme for burglary, he's shocked, but not necessarily uninterested.