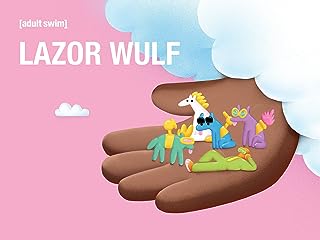 Season 2 of Lazor Wulf Lazor Wulf is about coming back from the DEAD$ and embracing the Scam of Life. The quarter-hour animated series is created by Henry Bonsu and executive-produced by Bonsu and Vince Staples. The animation studio is Six Point Harness. It’s definitely a quarter-hour series that definitely has a wolf with a laser on his back and situations that can be deemed to be most bizarre. An all-star voice cast returns with Vince Staples, Quinta Brunson, WWE Superstar Big E, J.D. Witherspoon, Andre Pascoe, Judnick Mayard, Reginald VelJohnson, and Shelley (formerly known as DRAM).