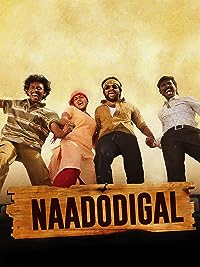 The film revolves around three characters , Karunakaran, Pandiand and Chandran. The trio eats, sleeps and parties together in Rajapalayam. They also have their individual ambitions in life. Karunakaran is in love with his uncle's daughter Nallammal. He is madly pursuing a government job because his uncle agrees to the marriage if and when he obtains one. Pandi is desperate to go abroad and get rich, while Chandran is committed to start a computer center. All goes well until Saravanan (Ranga) enters, a childhood friend of Karunakaran. Son of a former MP (Member of Parliament), he is in love with Prabha (Shanthini Devi), daughter of a bigwig in Namakkal. Shocked by Saravanan's suicide attempt due to love failure, the trio promises to help him out and unite the two lovers. They set out to Namakkal where they enlist the help of their old friend Maariyappan (Ganja Karuppu). The trio manages to help the couple get married by abducting the girl while she is visiting a temple with her family. A lot is lost in life for the three and as time goes by to thier utter dismay they realise that the star crossed lovers they had managed to unite at such great personal and emotional loss have gone their separate ways having grown bored of each other. They realise that the battle they fought did not serve any purpose. What the trio then does to teach the couple a lesson, forms the movie climax. Watch the full movie Naadodigal online, only on Eros Now.