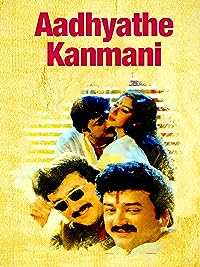 Balachandran Unnithan (Jayaram) is a singer who falls in love with Ambika, a singer from his own troupe. They both end up getting married. Balachandran's family has been longing for a male child to inherit the family's wealth, but his elder brothers were having only female children. Ambika gets pregnant. Balachandran realizes that his wife is carrying a daughter, and not a son. Later, he meets his old classmate and best friend, Padmarajan, whose wife Hema was also pregnant. She was bearing a male child. However, their babies were swapped by mistake by Balu's mother soon after delivery. Both Padmarajan and Balu must keep this as a secret to see their children. When Balu's cousins discover this, the babies get kidnapped by the antagonists. Watch the full movie Aadhyathe Kanmani online, only on Eros Now.