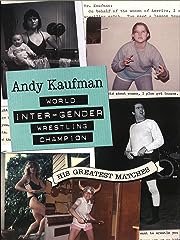 In November of 1979, Andy Kaufman wrestled a woman on NBC's Saturday Night Live. He then publicly challenged women around the country by mocking them in his best bad-guy wrestler persona, telling them to"go back to the kitchen where you belong, wash the pots and pans, scrub the potatoes and raise the babies". He offered to shave his head and pay $1,000 to any woman who could beat him, adding that"she would get to marry him". The hate mail poured in, which was recently published by Process Media in the book"Dear Andy Kaufman, I Hate Your Guts". What TV viewers didn't know was that the self-proclaimed"World Inter-Gender Wrestling Champion" was traveling around the country holding wrestling matches in any venue he could find: comedy clubs, mud-wrestling joints, college campuses, sports arenas, even on airplanes and in his own home (he had a wrestling mat there). Wherever there was an angry and willing female, Kaufman would wrestle her. This hysterical DVD, culled from Kauffman's private collection, compiled and edited by Kaufman's girlfriend and archivist Lynne Marguiles, shows priceless, never-before-seen footage of Kaufman taunting and taking on some of his legions of female atagonists.