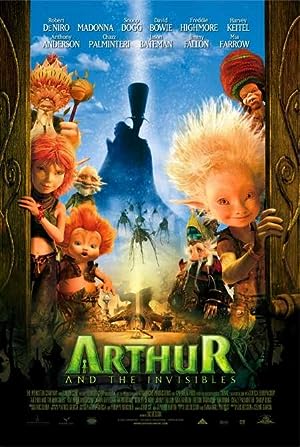 From the creative mind of talented filmmaker Luc Besson ("La Femme Nikita,""The Fifth Element"), comes a larger-than-life, family adventure about a boy who, after his grandfather disappears, sets out to save his family home from emerging real estate developers. Arthur learns that he must follow his grandfather's ancient clues to a vast treasure - and unlock the passageway to a spectacular new world filled with mysterious little people, so tiny they are considered invisible, and enlist their help. But once in the magical land, Arthur must join swords with a beautiful princess and a reckless army of defenders to save the land from the evil wizard. It seems like an impossible task, but as he discovers along the way, sometimes the smallest heroes can make the biggest difference. Using a dazzling new combination of live-action and ground-breaking CGI technology,"Arthur& The Invisibles" is the story about the true meaning of courage and the endless power of imagination. The film stars Mia Farrow and Freddie Highmore, featuring the voices of Anthony Anderson, Jason Bateman, David Bowie, Nate Corddry, Rob Corddry, Robert DeNiro, Emilio Estevez, Jimmy Fallon,Harvey Keitel, Madonna, Chazz Palminteri, Erik Per Sullivan and Snoop Dogg."Arthur and the Invisibles" was written and directed by Luc Besson and is based on the best selling children's book,"Arthur and the Invisibles."